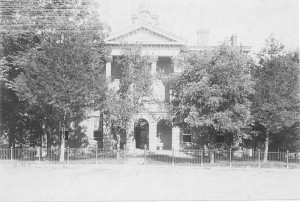 Hardeman County was founded in 1823, formed from Hardin County and Indian Lands.  The county seat is Bolivar.  Located in West Tennessee, the county is part of the state’s Western Division.  The site was named after Thomas Jones Hardeman (1788-1854).  The county is bordered by Haywood, Madison, Chester, McNairy, Fayette, and the state of Mississippi.  Hardeman County encompasses 670 square miles and 9 communities, Bolivar, Grand Junction, Hickory Valley, Hornsby, Middleton, Saulsbury, Silerton, Toone, and Whiteville.

For much of its history, Hardeman County’s economy has depended on agriculture and lumbering. Quickly identified as a favorable site for cotton production, the county early attracted planters who built plantations and worked the cotton fields with slave labor. No longer dependent upon cotton, the county’s farmers now engage in livestock production and plant a variety of crops. Hardeman is still the leading hardwood-producing center in West Tennessee. McAnulty’s Woods, a conservation site within the town of Bolivar, is the only known virgin forest remaining in West Tennessee.

Since the 1940s Hardeman County’s economy has shifted toward industrial production. As in other Tennessee counties, Hardeman workers are engaged in the production of automotive parts and textiles. In addition, factories in the county produce elevator appliances, pyrotechnics, electrical switches, and absorbent clay products. According to the 2000 census, 28,105 people lived in the county, representing an increase of 20 percent since 1990.